The origins of the school go back to 1968 when a Lithuanian priest trained by the Salesian order in Italy, Father Hermann Schulz, started a village for homeless children in Musha, Rwanda. At its peak after the Rwandan genocide, the village housed over 1000 children in dire need.  In his own words:

“When I came to Rwanda in 1968, I mostly worked for the poor and abandoned and for those who had been marginalised by everyone. As I made my way on this pilgrimage through human misery and poverty, I would always be accompanied by youngsters who were pleased to be with me. These very friends one day asked me to think about them too; to think about their futures which at the time seemed to offer no prospects whatsoever. They were illiterate and jobless. I asked what I could do for them in practical terms. The answer I was given was that they wanted to study and learn a trade. So, this is how the idea for the ‘Children’s Village’ was born.”

During the devastating Genocide in 1994, the village was completely destroyed and many of the youngsters there were killed. Father Hermann had to escape. He was taken away on a tank. He recounts: “I remember the distress the youngsters suffered as they wandered aimlessly amongst the ruins and dead bodies, asking me in anguish why all this had happened. I had no answers either, and I too was overcome by grief. I didn’t know what to do, and I was even tempted to abandon everything. I am grateful to all my friends in Europe who gave me the strength to carry on. Without their support, I wouldn’t have been able to do anything …” 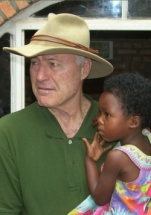 And so it was that in August of 1994, Father Hermann started work again to rebuild the Hameau des Jeunes in order to provide a home, a family and a future for the many youngsters who were now orphans of the Genocide.

Today, ‘The Children’s Village’ is home to 110 youngsters, with more arriving still.  Here, they have found  the affection that only a family like atmosphere can give, and the possibility of studying and growing up looking to the future with hope. The Village also helps support 400 families in the surrounding hills by providing donor-sponsored work programs in the school’s agricultural fields, allowing them to finance home improvement projects.

The school (ETSK) was founded by Father Hermann with extensive financial support from friends in Germany, Italy and Lithuania. A government  primary  school was already at walking distance from “ the Youth Village”. To meet the need of the rural and poor surroundings, ETSK first specialized in practical skills-training for students in grades 6-9. In 2010, the school progressed to being a high school (TVET – Technical and Vocational Training school)  and was certified by the Workforce Development Authority (WDA), with courses specializing in Construction and Computer Science.  We have recently added Culinary Arts to our curriculum.